In our annual survey, we asked travellers to rate airports worldwide based on their overall airport experience. They ranked their experiences based on:

Oh, the worst airports in the world… These terminals have the continued capacity to make travellers wonder why they didn’t just stay home. Whether its bathrooms that lack water and toilet paper, or staff who harass and frustrate you, these are not the places you want to find yourself for hours on end. Voters wrote in with endless comments that make cases for why these ten terminals are the absolute worst of the worst. All we can hope is that if you do find yourself here, you come prepared with hand sanitizer, patience, strong bladders and personal entertainment. It could be what saves your sanity!

Here are the Top 10 Worst Airports in the World based on overall airport experience, as determined by voters in our 2016 Airport Survey. It took 3 hours to go through the immigration. There were only 2 people working and 200 people in line. Then 2 working just leave their position without getting replaced and come back whenever they please. – survey respondent

Jeddah Airport jumped up to the number one spot on our Worst Airports in the World list, thanks to the fact that virtually all aspects of the terminals need serious improvement. Though JED continually promises that “next year” travellers will see a new terminal, clean toilets, more amenities and a semblance of organization have yet to appear. Instead, when you arrive at Jeddah’s Hajj Terminal you walk into a terminal where cleanliness is but a mythical concept. The place is said to be staffed by a team of immigration officers described as “careless”, “arrogant” and “rude”, and amenity-wise, the terminal is devoid of restaurants, shopping and entertainment. During peak hours – to say nothing of when the Hajj pilgrimage rolls around – the queues are unfathomable, and there are never enough chairs to accommodate. The thought of sleeping here during a long layover or flight delay is essentially unattainable. While travellers hope that 2017 will indeed be the year of the new airport, their only saving grace for now is the free Wi-Fi. ( Photo courtesy of Kалой Ахильгов (@akaloy) / Twitter.com ) Immigration can take 2 hours to process a single plane load of people while you watch what can only be described as an auction in the baggage area. It’s best not to pack valuables or sentimental things in your check in luggage. – survey respondent

When thinking about Juba Airport, it’s well worth remembering that the South Sudan is a fledgling state that has grappled with its fare share of warfare. Given this, we think it’s important to cut the terminal a bit of slack. That said, it’s certainly worth mentioning that this football-field sized airport is chaotic and sweaty, to say the least. Illogical lines with clammering fellow passengers make clearing through the questionable security system a feat in and of itself, with one passenger likening it to a “mosh pit sauna”. Once you’ve made it, you’ll hardly be rewarded with a comfortable seat. The boarding gates are notoriously hot, dirty and crowded, and toilets and seats are broken more often than not. However, as we said, the South Sudan has a few bigger concerns right now. ( Photo by City ren2002 / Wikipedia ) How can an international airport receive passengers in a tent? It is a disgrace. Also the domestic waiting area should be bigger, there are not enough chairs for everyone. – survey respondent

Last year’s winner of the title “Worst Airport in the World” seems to have pulled a few things together this year. While it’s still light years away from offering any kind of world class experience, time spent here is at least nominally better than time spent at Jeddah. That said, disappointment at PHC begins when you realize that the arrivals hall is in fact a tent/mosquito sanctuary, that lacks toilets and air conditioning. Picking up luggage is no picnic either – rather than conveyor belts, Port Harcourt opts for the old luggage pile, so keep your delicates well packed, and your valuables at hand. Looking more broadly, filthy floors, massive queues and allegations of corrupt staff, go on to make a bad thing worse. ( Photo courtesy of stesarge / Instagram ) When going out of the overcrowded bus that lead us from the plane to the passports control, people pushed me, I fell and then several local passengers walked on me while I was on the floor. – survey respondent

This year, Tashkent earned itself the title of fourth worst airport in the World – and the worst airport in Asia. As the primary airport for Central Asia, travellers here are most unimpressed by the multitude of checkpoints they’re required to pass through. Worse yet is that while these lineups are in place to enhance security, the pushy mobs waiting to pass through often have the inverse effect. When you finally make it to your boarding gate, life hardly improves. The chairs available are old and especially hard – and in notoriously short supply. The only saving grace here is the airport’s lone service and facility: free Wi-Fi. Bring an electronic device and disappear into it… It’s your best bet at sanity. ( Photo courtesy of akhmatkulova / Instagram ) To start, you have to wait in one of 3 lines in the heat. There is no one to tell you which line to go in so you just have to wait for an hour and hope you picked the right one. – survey respondent

Santorini’s Airport broadens our list of Worst Airports in the World to include a few offenders from Europe. Travellers say the big problem with JTR are the lines and the crowds. When you arrive at the airport, you get stuck outside waiting in long lineups under the hot Greek sun, just to access the terminal and ticketing counters! Once you wrangle your way through check-in and security, you’re then forced to wait in small rooms without air conditioning. With a high volume of travellers, the airside waiting areas are often hot, crowded and dirty. The toilets lack much in the way of cleanliness, and the announcements are virtually impossible to decipher. If you do find yourself with a prolonged period of time here, it’s well worth bringing your own snack and seeking out the outdoor terrace. Otherwise, your time here will be fairly intolerable. ( Photo courtesy of vit.spb / Instagram ) We had to stand in line for one hour to get our boarding cards, another 20 minutes to leave our baggage and finally 15 minutes to the security check. – survey respondent

Greece’s presence on our global worst airports list continues with worn-out Chania International Airport. Long lines and chaotic security processes aggravate travellers immediately upon arrival. Once airside, life hardly improves. With one basic food vendor selling mediocre sandwiches at five times the normal price, you’re unlikely to feel inspired to buy a meal. Chairs too are limited, meaning that you’ll probably be stuck leaning against a wall, or sitting on a less-than-desireable floor. The lack of air conditioning only makes things worse for those who spend ample time here, given that local temperatures are often well over 30 degrees Celsius. ( Photo courtesy of 1976reynolds / Instagram ) Advice: break it down, and build up a new airport somewhere else. Not possible to make something out of it. – survey respondent

Heraklion International Airport on the Greek island of Crete secures the title of seventh worst airport in the world thanks to long lines, crowded gates and no air-conditioning. Sweaty and cramped voters are further distraught by the the exorbitant food prices at one of two restaurants and by the sorry state of the bathrooms. Sadly, the staff do little to ease these grievances. Travellers vent about poor customer service just as much as they complain about the uncomfortable chairs. All in all, a sad way to end a visit to an otherwise delightful island. ( Photo courtesy of jantienlievense / Instagram ) It was once one of the best airports of all America. Then a nationwide corruption plague took over, and wham, it sunk all the way to the bottom of the darkest abyss. – survey respondent

Helping us take a break from the Greek airports is Caracas International Airport in Venezuela. Travellers are appalled by the fact that this airport seems to have foregone any effort at modernization, leaving them to fend for themselves in a hot, chaotic and chair-free environment. Sadly, the bathrooms here are too-often short on supplies, whether that’s a lack of water, no toilet paper, or an absence of cleanliness. Terminal and luggage safety is another major grievance, with most travellers warning that unwrapped bags are ripe for the picking. At a minimum, it’s recommended you leave 5 hours for a layover here, since terrible logistics and lines combine to create the perfect storm. ( Photo courtesy of doctoramonica / Instagram ) 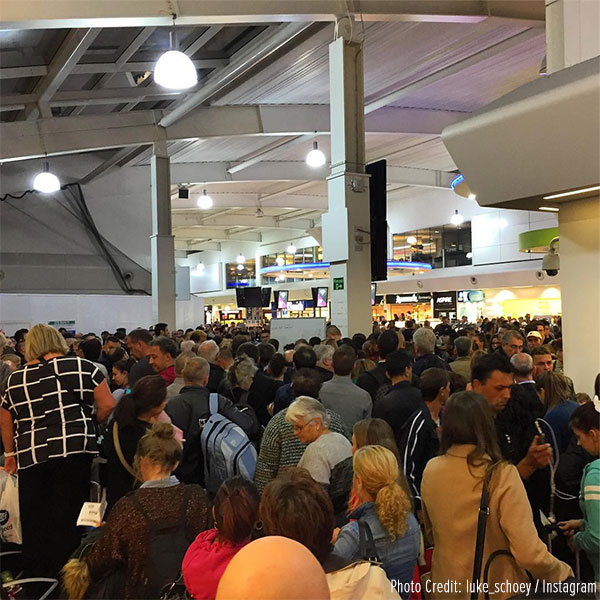 As you head out of the airport, spend a bit of time considering the irony that your experience between getting off the airplane and now walking out of the airport was actually longer than your flight. – survey respondent

Life at London Luton got substantially worse this year as a result of a series of renovations. The construction shrunk an already tiny airport to a barely manageable size. Most voters spent the bulk of their time in massive lineups – and once through to the gate were not actually rewarded with a seat. Though the statement that Luton looks like the “aftermath of a humanitarian disaster” might be a bit harsh, the cleanliness of the bathrooms and floors doesn’t do the terminal any favours. However, most aggravating of all is the fact that you get charged for virtually everything, including drop offs near the terminal, weighing suitcases and plastic bags for liquids! We can only hope that when the renovations are complete, LTN will be a far more pleasant place for travellers to use in the future. ( Photo courtesy of luke_schoey / Instagram ) 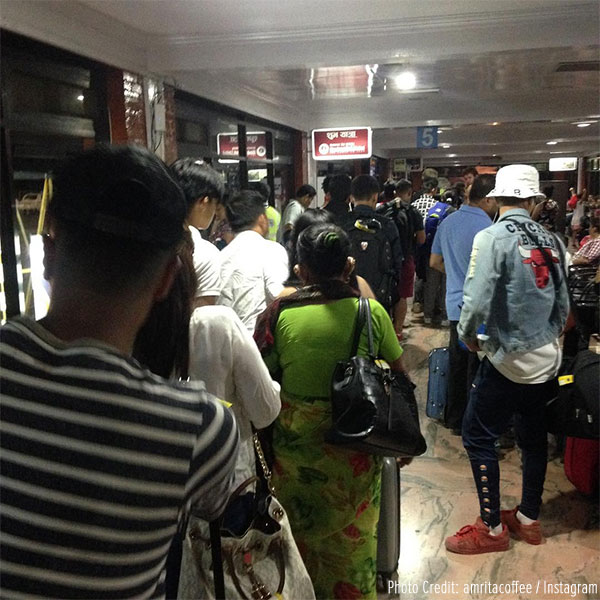 Some of my darkest memories are from having to use the toilets at this airport. – survey respondent

Kathmandu’s International Airport continues to struggle, though we feel it is important to recognize the devastation that occurred in Nepal in 2015. Small improvements have definitely been made to the international terminal in the years since; however, if you’re traveling domestic, be prepared for crowds and chaos. The terminal is especially dirty – and the toilets are said to smelly and should be “avoided until absolutely necessary”. Signage and food options are generally inadequate, and the staff do little in the way of being helpful. Couple this with long immigration lines and multiple annoying checkpoints, and you’re bound to have some unhappy travellers. ( Photo courtesy of amritacoffee / Instagram )

Negatives aside, there are a number of airports around the world that really do inspire you to travel more. Read on to learn about the best airports in the world!